I am still a bit jet lagged, but other than that I have absolutely no complaints!  The past two weeks have been a whirlwind and I wanted to take a moment to jot down some of my thoughts while things were still fresh in my mind.  Although I did make a few post while I was on vacation, they were hurried due to my lack of internet connection.  I have a few things that I’d like to share now that I have more time.    Out of the 5 countries that I visited, the place that I was most impressed with was London, England!  I would like to go back to London and stay for at least 3 days, I could easily stay a week because there was so much to see and do.  My least favorite place was Cork, Ireland.  Cork seemed like a glorified tourist town and not much else.  Their economy appeared to be hurting and just not a lot going on there.     I was most surprised by the unisex bathrooms in Paris, France. I went to the restroom and a homeless woman was in there trying to freshen up (my husband swears it was a man and he could be right).  I was not ready for that!  I thought Amsterdam was literally a breath of fresh air.  I didn’t see not one overweight person the entire time that I was in Amsterdam.  In fact, I only saw a couple of people that were overweight the entire time that I was traveling.  Unlike in the US, where it is very common to be overweight or see people that are overweight.  I wouldn’t mind visiting Amsterdam again because it seems like such a laid back place.      Taking time off forced me to slow down and in doing so I was able to really de-stress and take time to smell the roses so to speak.  I had the opportunity to check several things off of my 50 Before 50 list as well as take in some great sites.  I tried eggplant twice, visited a castle, rode a train, watched a sunrise, visited a new country, saw the Eiffel Tower, and had tea in London.  Below are a couple of pictures.  The first one, I am just being silly in Dublin, Ireland outside a tavern.  The second is Queen’s University in Belfast, Northern Ireland.Until next time, do something exciting my friends! 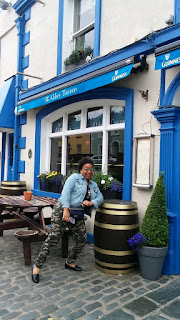 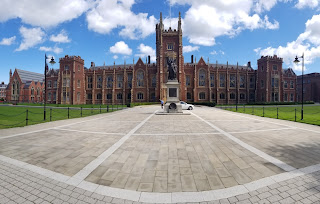